A study from the Harnett lab reveals that different parts of a single neuron represent different navigation features.

The organization of many neurons wired together in a complex circuit gives the brain its ability to perform powerful calculations. Work from the Harnett lab recently showed that even single neurons can process more information than previously thought, representing distinct variables at the subcellular level during behavior.

McGovern Investigator Mark Harnett and postdoc Jakob Voigts conducted an extremely delicate and intricate imaging experiment on different parts of the same neuron in the mouse retinosplenial cortex during 2-D navigation. Their set up allowed 2-photon imaging of neuronal sub-compartments during free 2-D navigation with head rotation, the latter being important to follow neural activity during naturalistic, complex behavior. 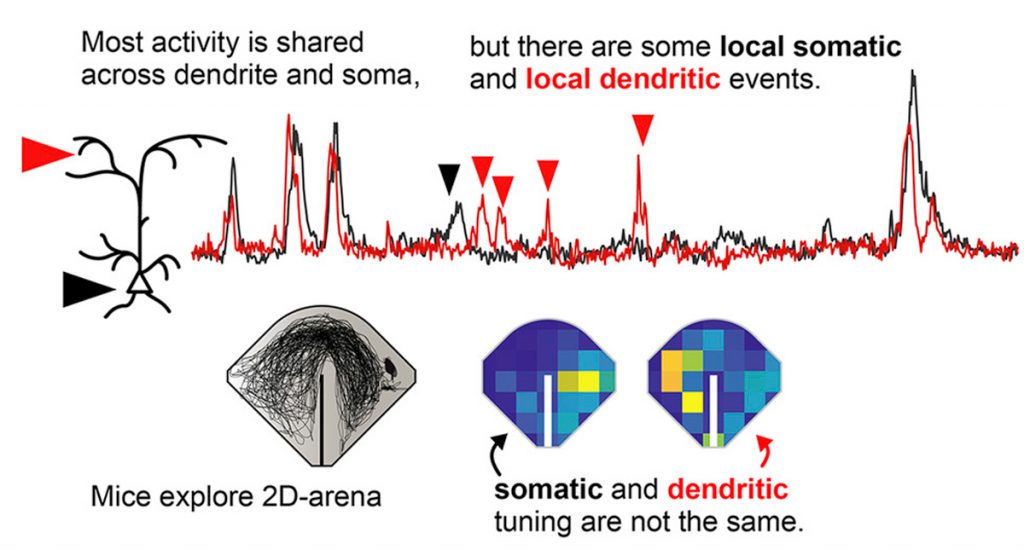 In the work, published recently in Neuron, the authors used Ca2+-imaging to show that the soma in a single neuron was consistently active when mice were at particular landmarks as they navigated in an arena. The dendrites (tree-like antennas that receive input from other neurons) of exactly the same neuron were robustly active independent of the soma at distinct positions and orientations in the arena. This strongly suggests that the dendrites encode distinct information compared to their parent soma, in this case spatial variables during navigation, laying the foundation for studying sub-cellular processes during complex behaviors.