Our perception of the world depends on our experience and assumptions, leading us to perceive and interact with the world in a way that’s uniquely ours.

Imagine you’re a detective. Your job is to visit a crime scene, observe some evidence, and figure out what happened. However, there are often multiple stories that could have produced the evidence you observe. Thus, to solve the crime, you can’t just rely on the evidence in front of you – you have to use your knowledge about the world to make your best guess about the most likely sequence of events. For example, if you discover cat hair at the crime scene, your prior knowledge about the world tells you it’s unlikely that a cat is the culprit. Instead, a more likely explanation is that the culprit might have a pet cat.

Although it might not seem like it, this kind of detective work is what your brain is doing all the time. As your senses send information to your brain about the world around you, your brain plays the role of detective, piecing together each bit of information to figure out what is happening in the world. The information from your senses usually paints a pretty good picture of things, but sometimes when this information is incomplete or unclear, your brain is left to fill in the missing pieces with its best guess of what should be there. This means that what you experience isn’t actually what’s out there in the world, but rather what your brain thinks is out there. The consequence of this is that your perception of the world can depend on your experience and assumptions.

Optical illusions are a great way of showing how our expectations and assumptions affect what we perceive. For example, look at the squares labeled “A” and “B” in the image below.

Is one of them lighter than the other? Although most people would agree that the square labeled “B” is much lighter than the one labeled “A,” the two squares are actually the exact same color. You perceive the squares differently because your brain knows, from experience, that shadows tend to make things appear darker than what they actually are. So, despite the squares being physically identical, your brain thinks “B” should be lighter.

Tricks of perception are not limited to optical illusions. There are also several dramatic examples of how our expectations influence what we hear. For example, listen to the mystery sound below. What do you hear?

Because you’ve probably never heard a sound quite like this before, your brain has very little idea about what to expect. So, although you clearly hear something, it might be very difficult to make out exactly what that something is. This mystery sound is something called sine-wave speech, and what you’re hearing is essentially a very degraded sound of someone speaking.

Now listen to a “clean” version of this speech in the audio clip below:

Dana Boebinger describes the science of illusions in this McGovern Minute.

These illusions have been specifically designed by scientists to fool your brain and reveal principles of perception. However, there are plenty of real-life situations in which your perceptions strongly depend on expectations and assumptions. For example, imagine you’re watching TV when someone begins to speak to you from another room. Because the noise from the TV makes it difficult to hear the person speaking, your brain might have to fill in the gaps to understand what’s being said. In this case, different expectations about what is being said could cause you to hear completely different things.

Which phrase do you hear?

Listen to the clip below to hear a repeating loop of speech. As the sound plays, try to listen for one of the phrases listed in teal below. 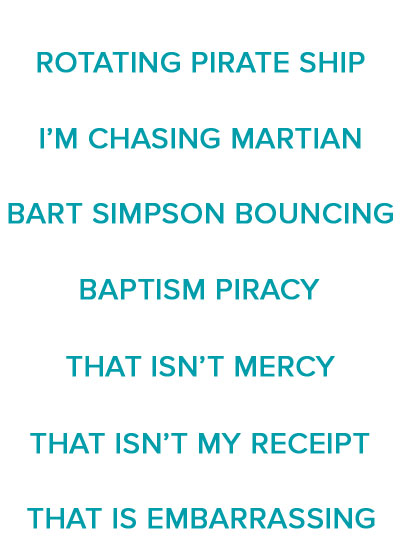 Because the audio is somewhat ambiguous, the phrase you perceive depends on which phrase you listen for. So even though it’s the exact same audio each time, you can perceive something totally different! (Note: the original audio recording is from a football game in which the fans were chanting, “that is embarrassing!”)

Illusions like the ones above are great reminders of how subjective our perceptions can be. In order to make sense of the messy information coming in from our senses, our brains are constantly trying to fill in the blanks and with its best guess of what’s out there. Because of this guesswork, our perceptions depend on our experiences, leading each of us to perceive and interact with the world in a way that’s uniquely ours.

Jarrod Hicks is a PhD candidate in the Department of Brain and Cognitive Sciences at MIT working with Josh McDermott in the Laboratory for Computational Audition. He studies sound segregation, a key aspect of real-world hearing in which a sound source of interest is estimated amid a mixture of competing sources. He is broadly interested in teaching/outreach, psychophysics, computational approaches to represent stimulus spaces, and neural coding of high-level sensory representations.

A voice for change — in Spanish

What words can convey